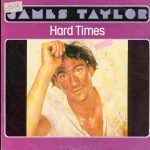 “Hard Times” is a song written by James Taylor. It first appeared on his 1981 album Dad Loves His Work. It was also released as a single, as the follow up to the Top-20 hit “Her Town Too.” It did not perform as well as its predecessor, reaching #72 on the Billboard Hot 100 and #23 on the Billboard Adult Contemporary chart. The single’s b-side, “Summer’s Here,” performed similarly on the Adult Contemporary chart, peaking at #25.

Like several other songs from Dad Loves His Work, “Hard Times” was influenced by the impending breakup of Taylor’s marriage to Carly Simon. Fans heard the song as a message that the marriage was about to end. According to Rolling Stone Magazine critic Don Shewey, it “explores marriage on the rocks.” The lyrics describe the difficulty for an “angry man” and a “hungry woman” to stay together, and hope that the couple can stop “driving each other crazy.” They lament the way the pair hurt each other. Taylor biographer Mark Robowsky describes the song’s groove as “easygoing.” But he also claims that the song’s refrain of “We’ve got to hold on, got to hold on” was a good hook, those lyrics were also false as by that time Taylor had already decided he did not want to hold on to his marriage with Simon.