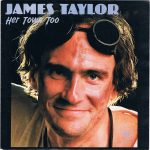 “Her Town Too” is a song written by James Taylor, J.D. Souther and Waddy Wachtel. It was first released as a duet between Taylor and Souther on Taylor’s 1981 album Dad Loves His Work. It was also released as a single in 1981, peaking at #11 on the Billboard Hot 100. The song had entered the Hot 100 chart at #38, making it one of the few songs to enter the chart in the Top 40 but not reach the Top 10. As of 2014, it is Taylor’s last single to reach the Top 40 of the Billboard Hot 100. “Her Town Too” also reached #5 on the Billboard Adult Contemporary chart and #21 on the Mainstream Rock chart.

The subject of “Her Town Too” is the aftermath of a breakup of a long term relationship. Taylor has called it “a tender, well-meaning song about how difficult it was to be friends” with both parties after the breakup. Since Taylor’s marriage to Carly Simon was breaking up at the time, there was speculation that the song was about their relationship. However, Taylor has stated that the song was about “the ex-wife of a mutual friend.” Author Sheila Weller has written that the subject was Betsy Asher, who had recently divorced from Taylor’s longtime manager and producer Peter Asher.

Taylor has said of the song that it “showed a maturity in song structure that had been developing since I wrote ‘Your Smiling Face’ for JT.” “Your Smiling Face and JT had been issued four years earlier, in 1977. Taylor also claimed that the song had “a relentless bolero quality.” The Rolling Stone Album Guide called it a “gently incisive divorce song” that was “among Taylor’s finest pieces of writing.”