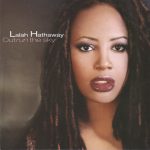 Outrun The Sky is the fourth album from American R&B singer, Lalah Hathaway. The album was released on September 7, 2004.

With the roster of 13 tracks, Allmusic.com chose the album picks to be “Forever, For Always, For Love”, “Back Then”, and “Boston”. The songs of album use the instruments of a keyboard, organ, guitars, drums, bass, and trumpet, which were demonstrated on the songs “Better and Better”, “Stronger”, “If U Ever”, and “How Many Times”. Allmusic also went on to the describe the album’s mood as Warm, Reflective, Passionate, Smooth, Lush, Romantic, Calm/Peaceful, Intimate, Soothing, and Sensual.

The track, “Better And Better” began as a track intended for an Eric Benet album of the same name. His finished track is the same as the one used on this album. Eric Benet’s lead and backgrounds were simply removed and Lalah’s were added.

4 Forever, For Always, For Love