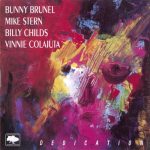 Dedication is the fourth solo album by Bunny Brunel. It was released in 1993

Bernard “Bunny” Brunel is a French-born American and 2-time Grammy-nominated bass guitarist who has played with various jazz musicians including Chick Corea, Herbie Hancock, and Wayne Shorter. He is a founding member of the jazz fusion band CAB, and is also involved in musical instrument design and film and television scoring