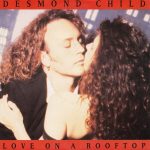 “Love on a Rooftop” is a song by Desmond Child. He wrote the song with Diane Warren for Cher in 1989 (Heart Of Stone). This release reached #40 on the US Billboard Hot 100.

Discipline is the only solo album recorded by American songwriter and producer Desmond Child. It was released on Elektra in 1991 and features his longer take on “Love on a Rooftop”, a song he wrote for Cher on her 1989 album Heart of Stone. Child’s version reached number 40 on the US Billboard Hot 100. […]