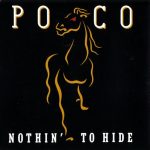 “Nothing To Hide” was the second single from the Poco album Legacy, released in 1989. The song was written by Richard Marx and Bruce Gaitsch.

Legacy is the 19th album by the country rock band Poco, released in 1989. The album reunited the five original members of the group (from the Pickin’ Up the Pieces album) and contained two top-40 singles, “Call It Love” and “Nothin’ to Hide.” Timothy B. Schmit and Paul Cotton were not involved in the making […]