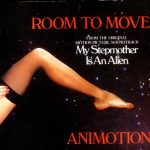 “Room to Move” is a pop song written by Simon Climie, Rob Fisher and Dennis Morgan. It first appeared on Climie Fisher’s debut album Everything, released in 1987.

It was remade by new wave group Animotion in 1989 and included on their eponymous third album. Animotion released the song as a single, and it reached number 9 on the Billboard Hot 100. Cynthia Rhodes and Paul Engemann shared lead vocals on the song, which was featured in the 1988 science-fiction comedy film, My Stepmother Is an Alien.

Animotion (Room to Move) is the third album by Animotion. It was released in 1989 by Polydor Records. Animotion is an American synthpop band from Los Angeles, California, best known for the songs “Obsession”, “Let Him Go”, “I Engineer, and “Room to Move”. Formed in 1983 from the remnants of a retro science-fiction band called […]