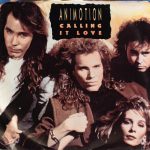 “Calling It Love” is the second single by . It was taken from the Animotion (Room To Move) album, released in 1989. The song was written by Anton Fig and Desmond Child.

Animotion (Room to Move) is the third album by Animotion. It was released in 1989 by Polydor Records. Animotion is an American synthpop band from Los Angeles, California, best known for the songs “Obsession”, “Let Him Go”, “I Engineer, and “Room to Move”. Formed in 1983 from the remnants of a retro science-fiction band called […]