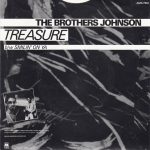 “Treasure” is the third single from the Brothers Johnson album Light Up The Night, released in 1980. The song was written by Rod Temperton.