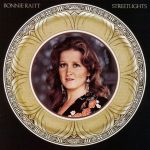 Streetlights is the fourth album by Bonnie Raitt, released in 1974.

Bonnie Raitt was allotted $10,000 by Warner Bros. Records to record Streetlights, which was the least amount of money she had received to record an album. Warner Bros. was unhappy with the lengthy production surrounding her previous album, Takin’ My Time, and the company limited her expenses. The two parties eventually agreed on an advance of more money, on the condition Raitt would choose a producer with a history of commercial success.Raitt chose Jerry Ragovoy, who had worked with musicians such as Janis Joplin and Dionne Warwick. Ragovoy felt Raitt’s music was bogged down by blues music, and wanted to produce an album with a more slick and polished pop sound. Raitt did not like Ragovoy’s decision, but acquiesced, and Streetlights was recorded during the summer of 1974.

Critics have described Streetlights as Raitt’s first attempt to record music for a mainstream audience. In contrast to the eclectic and laid-back sound of her first three albums, Streetlights features simpler arrangements with more string instrumentation, influenced by pop and R&B music. It is Raitt’s only album in which she does not play the slide guitar. Session musician Freebo said Raitt was negatively affected by the more professional production of Streetlights. “The environment changed her singing. She was in a professional world with Streetlights, and had to act like one” said Freebo. Nine of the ten tracks on the album are covers of songs by musicians such as Joni Mitchell, James Taylor, and John Prine. The one original track, “Ain’t Nobody Home”, was written by Ragovoy.

1 That Song About The Midway

8 Everything That Touches You

9 Got You On My Mind

10 You Got To Be Ready For Love