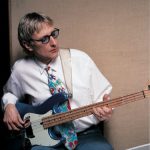 William Franklin “Will” Lee IV (born September 8, 1952) is an American bassist known for his work on the Late Show with David Letterman as part of the CBS Orchestra.

Born in San Antonio, Texas, Lee has recorded and toured with many artists. He appeared on the Mark & Clark Band’s hit record Worn Down Piano. He performs with his Beatles tribute band, The Fab Faux, which he co-founded in 1998.

1975 Creative Source – Pass The Feeling On

1976 Earl Klugh – Living Inside Your Love

1976 Randall Bramblett – Light Of The Night

1976 Steve Marcus – Sometime Other Than Now

1976 The Brecker Brothers – Back To Back

1979 Dusty Springfield – Living Without Your Love

1979 Felix Cavaliere – Castles In The Air

1979 George Benson – Livin’ Inside Your Love

2009 Vadim Eilenkrig – The Shadow of Your Smile

2013 Will Lee – Love, Gratitude And Other Distractions