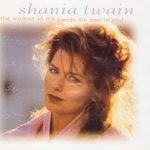 “The Woman in Me (Needs the Man in You)” is a song co-written and recorded by Canadian country music singer Shania Twain. It was released in August 1995 as the third single and title track from her album The Woman in Me. The song was written by Mutt Lange and Twain. The song became Twain’s third top-twenty hit at country radio. It was released to radio in August 1995, following the success of her previous single “Any Man of Mine”. Despite not being able to crack the top-ten “The Woman in Me” was still included in Twain’s 2004 Greatest Hits package.

The Woman in Me is the second studio album by Canadian country singer Shania Twain and her first with the majority of the songs co-written by her. Released on February 7, 1995, it went on to become her biggest-selling recording at the time of its release, selling 4 million copies by the end of the […]