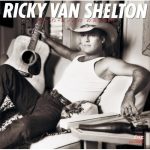 Wild-Eyed Dream is the title of the debut album by country music artist Ricky Van Shelton. The first singles released from the album from 1986 to 1988 were “Wild-Eyed Dream” and “Crime of Passion”, which charted at #24 and #7, respectively. The last three singles, “Somebody Lied”, “Life Turned Her That Way”, and “Don’t We All Have The Right” all reached #1. The album was certified platinum by the RIAA on July 24, 1989.[1]

“Working Man’s Blues” is a cover of the Merle Haggard song, while “Crazy over You” was also released by the duo Foster & Lloyd as their debut single. “Life Turned Her That Way” was previously a #11 single in 1967 for Mel Tillis, and “I Don’t Care” a #1 single for Buck Owens in 1964. Conway Twitty also recorded “Somebody Lied” for his 1985 album Don’t Call Him a Cowboy. “Don’t We All Have the Right” was originally recorded by Roger Miller on his 1970 album Trip in the Country.