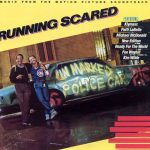 Running Scared is a 1986 buddy cop action-comedy film directed by Peter Hyams, written by Gary Devore and Jimmy Huston, and starring Gregory Hines, Billy Crystal, with Steven Bauer, Jimmy Smits, and Dan Hedaya in supporting roles. Hines and Crystal play Chicago police officers who, after nearly being killed on the job, decide to retire and open a bar in Key West, Florida, only to get caught up in making one last arrest before they go. The film was produced and released by Metro-Goldwyn-Mayer.

The Running Scared soundtrack was released in conjunction with the movie and contained a mix of songs and music featured in the film. The album sold well and produced three top 15 hits with performances by Klymaxx, Michael McDonald, New Edition, and Patti LaBelle. Producer Rod Temperton also contributed two songs with his band The Rod Temperton Beat Wagon.