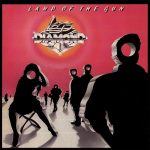 Land of the Gun is the fifth album by the band Legs Diamond. It was released in 1986.

Legs Diamond is an American rock band that has often been called “The American Deep Purple”. They formed in Los Angeles, California starting with Michael “Diamond” Gargano (bass) and Jeff Poole (drums). The group released their self-titled debut album for Mercury Records in 1977. The original band broke up in 1980 after three popular albums, but reformed in 1984 after their original albums had begun to acquire a cult following.