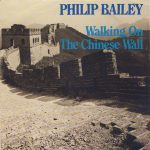 Phil Collins produced, played drums and sang, as part of the backgrounds, on the recording, however the song was not credited as a Bailey and Collins duet. Josie James also sang background vocals on the song. The Phenix Horns and additional overdub recording took place in Los Angeles, with George Massenburg engineering and mixing.

“Walking on the Chinese Wall” was the third single, released in 1985.

Chinese Wall is the third solo album by Philip Bailey, released on the Columbia Records label in October 1984. Chinese Wall has been certified gold in the US on March 11, 1985. The album reached number 22 and number 10 on the Billboard 200 and Top R&B/Hip-Hop Albums charts respectively and it was ranked as […]