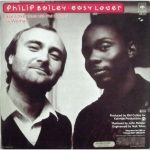 “Easy Lover” is a song performed by Philip Bailey, of Earth, Wind & Fire, and Phil Collins of Genesis and jointly written and composed by Bailey, Collins, and Nathan East (BMI adds Stacey Dove Daniels, Danny Ray Nixon & Olivia Pamela Roshell as co-owners of the rights). The song appeared on Bailey’s solo album Chinese Wall. Collins has performed the song in his live concerts and it appears on both his 1990 album Serious Hits… Live! and his 1998 compilation album, …Hits.

The song was a No. 1 hit in several countries worldwide, including Canada, the Netherlands, Ireland, and the United Kingdom. In the U.S. it reached No. 2 on the Billboard Hot 100 on 2 February 1985, kept out of the top spot by “I Want to Know What Love Is” by Foreigner. In the UK Singles Chart it reached No. 1, staying there for four weeks. The single was certified gold in the UK. The single sold over a million copies in the U.S. and was certified gold, as the RIAA requirement for a platinum single disc was not lowered to 1 million units until 1989. In addition, “Easy Lover” has been certified gold by the British Phonographic Industry for sales of over 400,000 in the UK and platinum in Canada by Music Canada.

Chinese Wall is the third solo album by Philip Bailey, released on the Columbia Records label in October 1984. Chinese Wall has been certified gold in the US on March 11, 1985. The album reached number 22 and number 10 on the Billboard 200 and Top R&B/Hip-Hop Albums charts respectively and it was ranked as […]