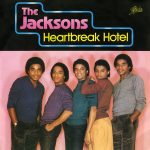 “This Place Hotel” (originally named “Heartbreak Hotel”) was a hit recording by The Jacksons released in 1980. Written and composed by Michael, the song would precede Jackson’s own hit, “Billie Jean”. While his brothers did not sing background vocals, they were credited with playing percussion on the album while brother Tito contributed a guitar solo. The song has a tempo of 98 beats per minute, making it notably slower than many of the other disco-based songs on the album. In the song, the protagonist speaks of a time when ten years ago, he took his girlfriend to a hotel for a romantic night – only to find out that it was designed specifically to break couples up. The staff at the hotel gave the girl the impression that he had cheated on her with someone else, something he did not do, which caused her to break up with him in the hotel.

Triumph is the sixteenth studio album by The Jacksons, released in 1980 on Epic Records. It was certified platinum in the U.S. and peaked at #10 on the Billboard 200. The Triumph album sold three million copies in its original run. Hit singles from the album were “Lovely One”, “Heartbreak Hotel” (which was renamed “This […]