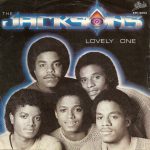 “Lovely One” is a funk single released by American family group The Jacksons on October 16, 1980.

Released as the first single from the brothers’ Triumph, it followed the hit “Shake Your Body (Down to the Ground)”. “Lovely One” nearly matched the success of the previous song, reaching number twelve on the Billboard Hot 100, number two on the Black Singles chart and along with the tracks “Can You Feel It” and “Walk Right Now”, “Lovely One” hit number one on the dance chart for one week

Triumph is the sixteenth studio album by The Jacksons, released in 1980 on Epic Records. It was certified platinum in the U.S. and peaked at #10 on the Billboard 200. The Triumph album sold three million copies in its original run. Hit singles from the album were “Lovely One”, “Heartbreak Hotel” (which was renamed “This […]