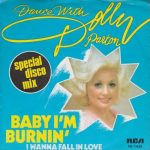 Issued from Parton’s RCA Records album Heartbreaker, after the success of the title single, “Baby I’m Burning” reached number 25 on the Billboard Hot 100 chart in early 1979, and also became a surprise hit on the disco chart, peaking at number 15.

Heartbreaker is the 20th solo studio album by Dolly Parton, released in 1978. Released following the huge pop crossover success of Here You Come Again, Heartbreaker was designed as an even more direct aim at the pop charts, with several of its songs verging on disco. The title song, a ballad written by Carole Bayer […]