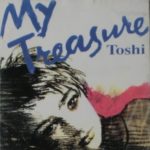 My Treasure is a single by the Japanese singer Toshi. It was released in 1994. It was never released on an album.