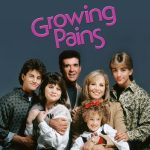 Growing Pains is an American television sitcom that aired on ABC from September 24, 1985, to April 25, 1992. The show ran for seven seasons, consisting of 166 episodes.

The Seaver family resides at 15 Robin Hood Lane in Huntington, Long Island, New York. Dr. Jason Seaver (portrayed by Alan Thicke), a psychiatrist, works from home because his wife, Maggie (Joanna Kerns), has gone back to work as a reporter. Jason has to take care of the kids: ladies man Mike (Kirk Cameron), bookish honors student Carol (Tracey Gold), and rambunctious Ben (Jeremy Miller). A fourth child, Chrissy Seaver (twins Kelsey and Kirsten Dohring; Ashley Johnson), is born in October 1988. In the middle of season four (1988–89), she was first played in her infant stage by an uncredited set of twin sisters. Then, by season five (1989–90), she was played in her toddler stage by alternating twins Kristen and Kelsey Dohering. In seasons six and seven (1990–92), Chrissy’s age was advanced to six years old. By the seventh and final season, homeless teen Luke Brower (Leonardo DiCaprio) is brought into the Seaver family to live with them nearly until the end of season seven.

The show’s theme song is “As Long as We’ve Got Each Other”, which was written and composed by John Bettis (lyrics) and Steve Dorff (music).