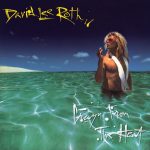 Crazy from the Heat is a 1985 EP by David Lee Roth. His debut solo recording, it was released while Roth was still lead singer for Van Halen, though he parted ways with the band several weeks later and launched a solo career. The EP is certified platinum by the RIAA, having sold over one million copies in the United States.

The entirety of Crazy from the Heat consists of cover versions of songs of decidedly dissimilar style from Roth’s previous work with Van Halen. The song “Easy Street” was originally recorded by The Edgar Winter Group, while “Coconut Grove” was originally recorded by The Lovin’ Spoonful. The medley of “Just a Gigolo” and “I Ain’t Got Nobody”, perhaps the EP’s best-known song, is based on Louis Prima’s 1956 medley combining two pre-World War II songs. Roth’s version of the well-known Beach Boys’ hit “California Girls” peaked at #3 on the Billboard Hot 100, the same position that the Beach Boys’ original rendition reached 20 years prior.

According to album’s liner notes, the cover picture of Roth was shot in the Seychelle Islands.