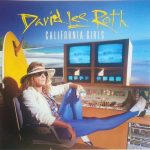 “California Girls” was covered by David Lee Roth on his 1985 EP Crazy from the Heat (with background vocals by Beach Boy Carl Wilson along with Christopher Cross). Like the original, it peaked at #3 on the Billboard Hot 100.

The music video for the cover, directed by Pete Angelus and Roth, was released in February 1985.[29] Roth stars as a tour guide, showing tourists (one played by Jane Leeves, who went on to play Frasier’s Daphne Moon) the beach and swimsuit models. The female bodybuilder featured in the video is Roth’s personal fitness trainer, Kay Baxter. The scenes follow the lyrics with bikini-clad women from all regions of the United States. An oft-imitated scene has Roth dancing down a sidewalk bordered by models frozen like mannequins. “That is Diamond Dave, the character,” he observed. “That is definitely a part of me: I grew up in that whole Southern California thing. I dee-lite in it! But you don’t have to be there to celebrate the spirit.” The clip was nominated for several 1985 MTV Video Music Awards. In an interview with Howard Stern, Roth explained that he edited the video while wearing thick skiing goggles that greatly impaired his vision. Each time the editor increased the red saturation, Roth told him to turn it higher, finally proclaiming, “Now THAT’S red!” The video was parodied in one for The Dresden Dolls’ “Shores of California”.

Crazy from the Heat is a 1985 EP by David Lee Roth. His debut solo recording, it was released while Roth was still lead singer for Van Halen, though he parted ways with the band several weeks later and launched a solo career. The EP is certified platinum by the RIAA, having sold over one […]