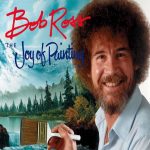 The Joy of Painting is an American half-hour instructional television show hosted by painter Bob Ross which ran from January 11, 1983 until May 17, 1994. In each episode, Ross taught techniques for landscape oil painting, completing a painting in each session. The program followed the same format as its predecessor, The Magic of Oil Painting, hosted by Ross’s mentor Bill Alexander. During its run, it won three Emmy Awards.