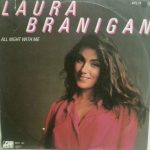 “All Night with Me” is a song by the American pop singer Laura Branigan, released in 1982 as the lead single from her debut studio album Branigan. It was written by Chris Montan and produced by Jack White. “All Night with Me” was released in the United States and Germany, and reached No. 69 on the US Billboard Hot 100.

Branigan’s debut single, “All Night with Me” preceded her US No. 2 hit “Gloria”. In Germany, Branigan promoting the single by performing it on the TV music show Disco.

﻿﻿﻿﻿Branigan is the debut album by American singer Laura Branigan, released in March 1982 on Atlantic Records. Two singles were released from the album: Although the first “All Night With Me”, failed to enter the Top 40, the second single, an English version of the Italian hit by Umberto Tozzi “Gloria”, made the singer a […]