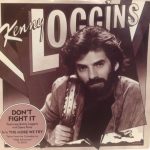 “Don’t Fight It” is a rock song performed by Kenny Loggins and Steve Perry, the lead-singer for Journey at that time. It is contained in Loggins’ 1982 album High Adventure. Loggins described the song as ‘an experiment in pushing my limits to include rock’, from the liner notes of his 1997 compilation Yesterday, Today, Tomorrow.

According to Loggins, the bullwhip sound effect in the song was created using a whip that was also used for the Indiana Jones movies.

It was released as a single in August 1982 and peaked at number 17 on the U.S. Billboard Hot 100. Also was nominated at the 1983 Grammy Awards for Best Rock Performance by a Duo or Group with Vocal.