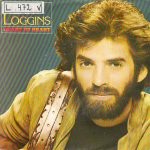 “Heart to Heart” is a song by American musician Kenny Loggins, Michael McDonald, and composer David Foster. It was released in 1982 as the second of three singles from his 1982 album High Adventure. It reached number 15 on the Billboard Hot 100 and spent five weeks in that position, from late January through late February. It spent a total of 13 weeks in the Top 40, and 17 weeks on the Hot 100. It also reached number 15 on the U.S. Cash Box Top 100.

“Heart to Heart” was also very successful on the Adult Contemporary charts, reaching number three in the U.S. and number one in Canada.

The song speaks of the mutual opening of hearts as being the only way to preserve a relationship once the partners have allowed themselves to grow apart. The lyrics acknowledge the fact that most relationships do not endure the test of time, yet still some are able to do so. It features additional vocals by co-writer McDonald and a saxophone solo by David Sanborn.

High Adventure is the fourth solo album by soft rock singer, Kenny Loggins. Released in 1982, it is perhaps best known for its top 40 pop singles “Heart to Heart”, “Welcome To Heartlight” and “Don’t Fight It”, which was co-written by Journey frontman Steve Perry, who also performs on the track, and Neil Giraldo, Pat […]