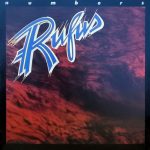 Numbers is the seventh studio album by funk band Rufus, released on the ABC Records label in 1978. It was the band’s first album without Chaka Khan on lead vocals. Instead, band members Tony Maiden and David “Hawk” Wolinski shared lead vocal duties, with additional female leads by Helen Lowe and Maxayne. The album reached #15 on Billboard’s R&B Albums chart, #81 on Pop and included the single release “Keep It Together (Declaration of Love)” (US R&B #16).

Khan returned to the band for the recording of the following album Masterjam, produced by Quincy Jones.

Numbers would be Rufus’ final album on ABC Records. The label would be purchased and subsequently dissolved by MCA Records, and the band transferred to its roster.

Numbers also marked the debut of drummer John “J.R.” Robinson to the lineup. He would remain Rufus’s drummer for the rest of their run.

3 Keep It Together (Declaration Of Love)