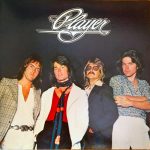 It was released in 1977 on RSO Records and featured the hit single, “Baby Come Back”, which was written by guitarist/keyboardist/vocalist J.C. Crowley & guitarist/vocalist Peter Beckett.

“Baby Come Back” peaked at number 1, interrupting a string of #1 Bee Gees hits also on RSO records, and stayed on the charts for a total of 32 weeks. It got as high as number 32 in the U.K. (for 7 weeks) as well. The follow-up single, “This Time I’m in It for Love” did almost as well, reaching number 10, and staying there for 17 weeks.