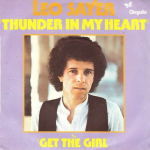 The following year, Leo Sayer appeared on Celebrity Big Brother in the United Kingdom, and claimed credit for this song getting to number one as he said:

“It wasn’t just because it was a hot tune, it was all because “Oh my God, it’s Leo Sayer”.”
After being internationally released, it was shown before the animated film Ice Age: The Meltdown. In the music video, when the female dancers start dancing, this scene is a homage to Xanadu. When the music video was originally released online, it appeared as it was released. However, one version lacks the scenes featuring Leo Sayer and the accompanying sound effects.