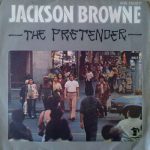 “The Pretender” is a song written and performed by American rock performer Jackson Browne and featured on his 1976 album The Pretender.

“The Pretender” was composed, according to Browne, in a number of locations; in Los Angeles, within a rented store-front in North Hollywood, and in a “tacky” hotel in Hawaii. Browne is quoted to have claimed that the song was almost complete before he had discovered the defining opening piano-riff.

In answering the question of who The Pretender is, Browne said – “…it’s not me exactly, although sometimes people applaud for me at that moment in the song as if I am, but in truth there is a bit of The Pretender in me, but it’s anybody that’s sort of lost sight of some of their dreams…and is going through the motions and trying to make a stab at a certain way of life that he sees other people succeeding at. So maybe it’s a lot of people of a certain generation who sort of embraced a very material lifestyle in place of dreams that they had that sort of disintegrated at some point.”

Piano is in the forefront, played by Craig Doerge. Drums are played by Jeff Porcaro, bass by Bob Glaub, acoustic guitar and electric guitar are played by Fred Tackett, harmonies performed by David Crosby and Graham Nash and the string section was arranged by David Campbell.

“The Pretender” was only a minor hit single, reaching #58 on the Billboard Hot 100, spending 5 weeks on the chart in 1977. However, it gained substantial progressive rock radio and album-oriented rock airplay, and has since become a staple on many classic rock formats. It has been one of Browne’s most often performed songs during his concert tours. As a result, it is one of Browne’s best-known works.

The Pretender is the fourth album by American singer/songwriter Jackson Browne, released in 1976 (see 1976 in music). It peaked at #5 on Billboard’s album chart. The singles from the album were “Here Come Those Tears Again” which reached number 23 and “The Pretender” which peaked at number 58. The title track was featured in […]

END_OF_DOCUMENT_TOKEN_TO_BE_REPLACED

1977 Jackson Browne – Here Come Those Tears Again (US:#23) 1994 Roger Daltrey – A Celebration: The Music of Pete Townshend and the Who