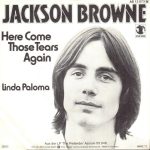 “Here Come Those Tears Again” is a song written and performed by American singer-songwriter Jackson Browne and included on his 1976 album The Pretender. Released as a single, it reached #23 one year to the week after the death of Browne’s wife, Phyllis Major, spending nine weeks on the chart, after entering the Billboard Hot 100 on February 5, 1977 at position #64, the highest debut of the week. It also reached #15 on the Billboard Adult Contemporary chart. The single was the eighth-highest charting of his Hot 100 career. It was also released as a single in the United Kingdom, Germany and Japan.

The Pretender is the fourth album by American singer/songwriter Jackson Browne, released in 1976 (see 1976 in music). It peaked at #5 on Billboard’s album chart. The singles from the album were “Here Come Those Tears Again” which reached number 23 and “The Pretender” which peaked at number 58. The title track was featured in […]