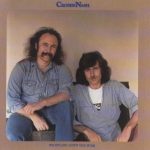 Whistling Down the Wire is the third album by Crosby & Nash, released on ABC Records in 1976, the second of the duo’s three-album deal with ABC Records. Cassette and 8-track tape versions of the album were distributed by Atlantic Records, to which Crosby, Stills, Nash & Young were signed. It peaked at #26 on the Billboard 200 album chart and was certified gold by the RIAA. Two singles were released from the album, “Out of the Darkness” and “Spotlight,” of which only the first charted on the Billboard Hot 100, peaking at #89.

After the success of their previous album, David Crosby and Graham Nash took the band that played on the album out on tour in the summer and fall of 1975. In the course of recording sessions for this album, both were invited to add vocals to a project by Stephen Stills and Neil Young that would become that pair’s only duo album to date, Long May You Run credited to the Stills-Young band. What could have been a potential CSNY reunion got torpedoed by Stills and Young wiping the other pair’s vocal contributions from the master tapes; Crosby and Nash opted not to return to the Stills-Young sessions but complete this album instead. Crosby and Nash would tour again to support this album in 1976, but by the end of the year would reunite with Stills for the second CSN trio album, released in 1977. That album would successfully reactivate the trio on a more or less permanent basis, and there would not be a new Crosby & Nash studio album for another 28 years.

1980 Michael And Stormie Omartian ‎– The Builder 1982 The Temptations – Reunion