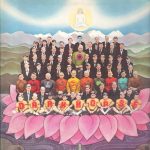 Dark Horse is the fifth studio album by English rock musician George Harrison, released on Apple Records in December 1974 as the follow-up to Living in the Material World. Although keenly anticipated on release, Dark Horse is associated with the controversial North American tour that Harrison staged with Indian classical musician Ravi Shankar in November and December that year. This was the first US tour by a member of the Beatles since 1966, and the public’s nostalgia for the band, together with Harrison contracting laryngitis during rehearsals and choosing to feature Shankar so heavily in the program, resulted in scathing concert reviews from some influential music critics.

The Dark Horse album was written and recorded during an extended period of upheaval in Harrison’s personal life, when he dedicated much of his energies to business issues such as setting up Dark Horse Records. Author Simon Leng refers to the album as “a musical soap opera, cataloguing rock-life antics, marital strife, lost friendships, and self-doubt”, due to its focus on Harrison’s split with first wife Pattie Boyd and his temporary withdrawal from the spiritual certainties of his previous work.

The album features an array of guest musicians – including Tom Scott, Billy Preston, Willie Weeks, Andy Newmark, Jim Keltner, Ringo Starr, Gary Wright and Ron Wood – and produced two hit singles, “Dark Horse” and “Ding Dong, Ding Dong”. It showed Harrison moving towards the funk and soul musical genres. The album was not well received by the majority of critics at the time. Dark Horse was certified gold by the Recording Industry Association of America within days of release, but it became Harrison’s first solo album not to chart in Britain. The cover was designed by Tom Wilkes and consists of a school photograph from Harrison’s time at the Liverpool Institute superimposed onto a Himalayan landscape.