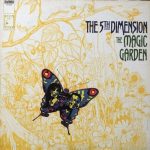 The Magic Garden is the second album by American pop group the 5th Dimension, released in 1967 (see 1967 in music). Considered a concept album, it tells the story of a couple’s love and the end of their relationship. In more recent discussions of the album, that love affair is said to be about Jimmy Webb — who authored 10 of the album’s 11 tracks — and his time with singer and then-girlfriend Susan Horton. The only non-Jimmy Webb song on the album, “Ticket to Ride”, is an unused track from the group’s first album, Up, Up and Away, the title track of which was also written by Webb.