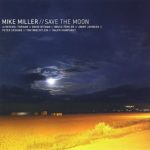 Save The Moon is an album by Mike Miller, released in 2006.

Miller has released two albums under his own name and two other projects; with The Outsidemen, Band Overboard (1996), and with Bruce Arnold, Two Guys from South Dakota (2005).

1 The Sky Lights Up

7 I Am The Walrus