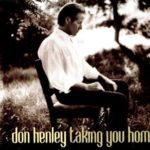 “Taking You Home” is a 2000 track from Don Henley‘s CD Inside Job. The track was written by Henley along with Stuart Brawley and Stan Lynch and was Henley’s only number one on the Adult Contemporary chart as a solo artist. “Taking You Home” stayed at number one for four weeks and went to number 58 on the Billboard Hot 100.

Inside Job is the fourth solo studio album by Don Henley, the lead vocalist and drummer for the Eagles. The album was released through the Warner Bros. record label on May 23, 2000, the album was Henley’s last album of all-new material until the release of Cass County in 2015. The song “Goodbye to a […]