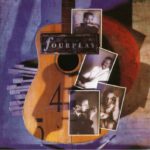 Fourplay is the debut album of the contemporary jazz quartet Fourplay which was released by Warner Bros. Records on September 17, 1991. The album cover showed four pictures of the original group on a variety of musical instruments (such as a guitar, piano keys and a drum). The album has sold over 1,000,000 copies in the United States and has thus been certified platinum by the RIAA. Their album charted at the No. 1 position on the Billboard Contemporary Jazz Charts for an unprecedented 33 weeks.

Related Terms:
1990 Frank Gambale – Thunder From Down Under 1989 Stix Hooper – Lay It On The Line