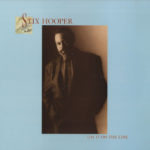 Lay it on the line is the third solo album by Stix Hooper, released in 1989.

Nesbert “Stix” Hooper (born August 15, 1938, Houston, Texas, United States) is an American drummer, best known as a founding member of the seminal jazz band, The Crusaders. He and Hubert Laws, who left the group to attend Juilliard in 1960, are the only surviving members of the original group, Jazz Crusaders, which became The Crusaders. Stix retired from the Crusaders in the early-2000s.