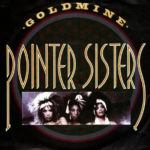 Goldmine was the leading single from the Pointer Sisters album Hot Together, released in 1986.

Hot Together is the title of the twelfth studio album by the Pointer Sisters released in November 1986 by RCA Records. The eighth of the group’s nine collaborations with producer Richard Perry, Hot Together represented a downturn in the Pointer Sisters’ fortunes. The lead single, “Goldmine,” charted well on Billboard’s R&B and dance charts but […]