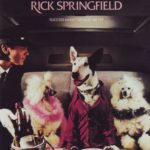 Success Hasn’t Spoiled Me Yet is an album by rock musician Rick Springfield, released by RCA Records in 1982. The album was certified Platinum in the United States, and produced three top 40 singles; “Don’t Talk to Strangers” (#2 – for four weeks), “What Kind of Fool Am I” (#21, not the show tune of the same name) and “I Get Excited” (#32). “Don’t Talk to Strangers” and “Calling All Girls” also received considerable Album Rock airplay, charting at #11 and #4 respectively.

In an interview with Songfacts, Springfield explained that “Don’t Talk to Strangers” was about his paranoia that his girlfriend was being unfaithful when he was away. The song melody is actually from the earlier recording called “Spanish Eyes”, found on Rick’s “Sound City Recordings” from 1978.

“Kristina” is a remake of the Bachman–Turner Overdrive song “Jamaica”, using different lyrics.

The album’s name is a play on the question Will Success Spoil Rock Hunter?, the name used for a 1955 play and a 1957 film that were mostly unrelated to each other.