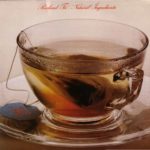 Natural Ingredients is the second solo album by Richard Tee, released in 1980.

Richard Tee (November 24, 1943 – July 21, 1993) was an American pianist, studio musician, singer and arranger who had several hundred studio credits and played on such notable hits as; In Your Eyes, Slip Slidin’ Away, Just the Two of Us, Tell Her About It, and many others.