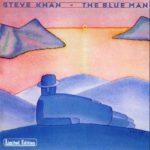 The Blue Man is Steve Khan‘s second solo album . The staff who used the Sound Media sound studio were the same as with his previous studio album. Jean-Michel Folon is the cover designer.