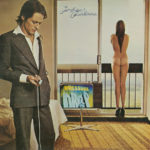 Pressure Drop is the second solo album by Robert Palmer, released in 1975. Palmer is backed by Little Feat and other musicians. The title track is a cover version of the reggae hit by Toots & the Maytals. However, many other songs on the album use “New Orleans funk … along with smooth, dated disco ballads smothered in strings”. Continuing his association with Little Feat started by his cover of “Sailing Shoes” on his 1974 debut album Sneaking Sally Through the Alley, Feat was used as backing band on several cuts, most notably Lowell George’s slide guitar on “Here With You Tonight”. George also contributed the tune “Trouble” on which Feat pianist Bill Payne plays the intro.