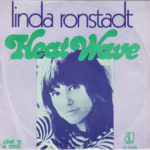 “Heat Wave” is a 1963 song written by the Holland–Dozier–Holland songwriting team. It was first made popular by the American Motown girl group Martha and the Vandellas. Released as a 45 rpm single on July 9, 1963, on the Motown subsidiary Gordy label, it hit number 1 on the Billboard Hot R&B chart—where it stayed for four weeks running—and peaking at number 4 on the Billboard Hot 100.

Linda Ronstadt remade “Heat Wave” for her album Prisoner in Disguise which was recorded at The Sound Factory in Hollywood between February and June 1975 and released that October. Ronstadt’s sideman Andrew Gold told Rolling Stone: “[her] band had been trying to get Linda to add it to her [live] set for quite awhile [sic]…one night at a Long Island club called My Father’s Place we received six encores and we’d run of tunes. One of us yelled out ‘Heat Wave in D’ and we did it. [The band was] awfully sloppy but the crowd really liked it. So we kept the song in our set.”

Michael Epstein the manager of My Father’s Place states he was responsible for Ronstadt’s singing “Heat Wave” at his club: when Ronstadt went backstage after advising the audience she and the band had no more material Epstein says he suggested Ronstadt perform “Heat Wave” writing down the lyrics and playing some chords on a guitar to help her band improvise.

According to the Rolling Stone article the perfectionism of Ronstadt’s producer Peter Asher “led to many, many hours of work on ‘Heat Wave’ in a process that would [likely] amuse the old-line Motown musicians involved in the almost assembly-line approach that resulted in hits including Martha and the Vandellas’ 1963 recording of the song.”

Although Ronstadt had made her top ten breakthrough in 1975 with remakes of the 1960s hits “You’re No Good” and “When Will I Be Loved”, the lead single from Prisoner in Disguise was the original Neil Young composition “Love Is a Rose” with “Heat Wave” relegated to the B-side of the single which was released in August 1975. However pop radio disc jockeys preferred “Heat Wave”, which rose to a number 5 peak in November 1975, while “Love Is a Rose” received support from C&W radio, reaching number 5 on the C&W chart in Billboard magazine.

Prisoner In Disguise  is Linda Ronstadt‘s sixth solo LP release and her second for the label Asylum Records, released in 1975  It followed Ronstadt’s Multi-Platinum breakthrough album, Heart Like a Wheel, which became her first of three #1 albums on the Billboard album chart in early 1975. Linda Ronstadt chose songs from friends and songwriters […]