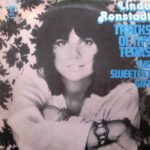 “The Tracks of My Tears” is a song written by Smokey Robinson, Pete Moore, and Marv Tarplin. It is a multiple award-winning 1965 hit R&B song originally recorded by their group, The Miracles, on Motown’s Tamla label. In 1967, Johnny Rivers covered the song and his version was a number 10 hit on the Billboard Hot 100.

In 1975, Linda Ronstadt recorded a cover version of “The Tracks of My Tears” for her studio album Prisoner in Disguise that became a pop Top 40 hit in the US. The single was produced by Peter Asher and issued on Asylum Records as that album’s second single. Ronstadt’s version of the song was a success peaking at number 25 on the Billboard Hot 100 chart, reaching number 11 on the Billboard C&W chart in tandem with its B-side: the Emmylou Harris duet: “The Sweetest Gift”), and number 42 in 1976 on the UK Singles Chart.

Prisoner In Disguise  is Linda Ronstadt‘s sixth solo LP release and her second for the label Asylum Records, released in 1975  It followed Ronstadt’s Multi-Platinum breakthrough album, Heart Like a Wheel, which became her first of three #1 albums on the Billboard album chart in early 1975. Linda Ronstadt chose songs from friends and songwriters […]