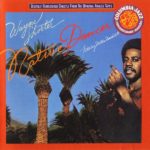 Native Dancer is the fifteenth album by Wayne Shorter. It is a collaboration with Brazilian musician Milton Nascimento, featuring some of his most acclaimed compositions, including “Ponta de Areia” and “Miracle of The Fishes”. It is notable for including jazz rock and funk elements in addition to regional rhythms and Brazilian influence, in an attempt to create a “world” music accessible from many perspectives. Many American musicians were influenced by this album, including Esperanza Spalding and Maurice White of Earth, Wind, and Fire, who covered “Ponta de Areia” on their hit 1977 album All ‘n All. The Penguin Guide to Jazz, while praising Shorter’s tenor work, calls it “a bland samba setting which does more to highlight Nascimento’s vague and uncommitted vocal delivery than the leader’s saxophone playing.”

2 Beauty And The Beast

4 Miracle Of The Fishes

6 From The Lonely Afternoons