1974 Soundtrack – Phantom Of The Paradise 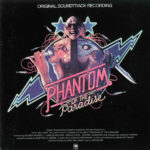 Phantom of the Paradise is a 1974 American musical rock opera horror comedy film written and directed by Brian De Palma, and scored by and starring Paul Williams. In the film, a disfigured composer writes his music for a woman he loves so that she will perform his music. However, a record producer betrays him and steals his music to open his rock palace, The Paradise. Betrayed, the composer dons a new appearance and exacts revenge on the producer. It co-stars William Finley and Jessica Harper.

The story is a loosely adapted mixture of several classic European works: Gaston Leroux’s novel The Phantom of the Opera, Oscar Wilde’s The Picture of Dorian Gray, and Faust by Goethe/Christopher Marlowe.

The film was a box office failure and received negative reviews; however it earned praise for its music, receiving Academy Award and Golden Globe nominations. Over the years, the film has received much more positive reviews and has become a cult film.

6 The Undead – Somebody Super Like You (Beef Construction Song)