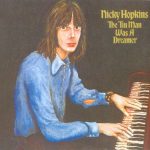 The Tin Man Was a Dreamer is a studio album by English musician Nicky Hopkins, released in 1973 on Columbia Records. While Hopkins had long been well known for his distinctive, melodic style on piano and Wurlitzer electric piano, the album provided a rare opportunity to hear him sing, unlike his earlier solo releases The Revolutionary Piano of Nicky Hopkins and Jamming with Edward! The album was co-produced by Neil Young’s regular producer, David Briggs, and featured contributions from George Harrison (credited as George O’Hara), Mick Taylor, Klaus Voormann and Hopkins’ fellow Rolling Stones sidemen Bobby Keys and Jim Price.

Having recently completed his duties on the Rolling Stones’ “STP tour” of North America, Hopkins began work on his second official solo album in London during September 1972. Sessions took place at the Beatles’ old Apple Studio, in short bursts between Hopkins’ session work for what would be two major releases of 1973: George Harrison’s Living in the Material World and the Stones’ Goats Head Soup (the latter’s held at Dynamic Sound in Kingston, Jamaica). All the material was written by either Hopkins or in collaboration with singer Jerry Lynn Williams. One of the solo compositions, “Edward”, was a short, simplified take on the much-admired “Edward, the Mad Shirt Grinder”, from Hopkins’ days in Quicksilver Messenger Service (and released on their 1969 album Shady Grove).

Recording The Tin Man Was a Dreamer is said to have been a “weekend” activity, while the Harrison sessions took place on weekdays. From the Material World line-up, Klaus Voormann played bass on all tracks on the Hopkins album bar the piano-only opener, “Sundown in Mexico”; Harrison contributed lead (mostly slide) guitar to “Banana Anna”, “Speed On”, “Edward” and “Waiting for the Band”; and Jim Horn augmented the Bobby Keys–Jim Price horn section for “Speed On”. Rolling Stone Mick Taylor played rhythm guitar on this last song and handled the guitar parts on “Dolly”, “The Dreamer” and “Lawyer’s Lament”. For these last three tracks, orchestration was later overdubbed by Elton John’s arranger, Del Newman. Repaying the favour from earlier in the year when Hopkins’ played on his own solo album, Keys also contributed to “Edward”, “Speed On”, “Banana Anna” and “Pig’s Boogie”.

2 Waiting For The Band